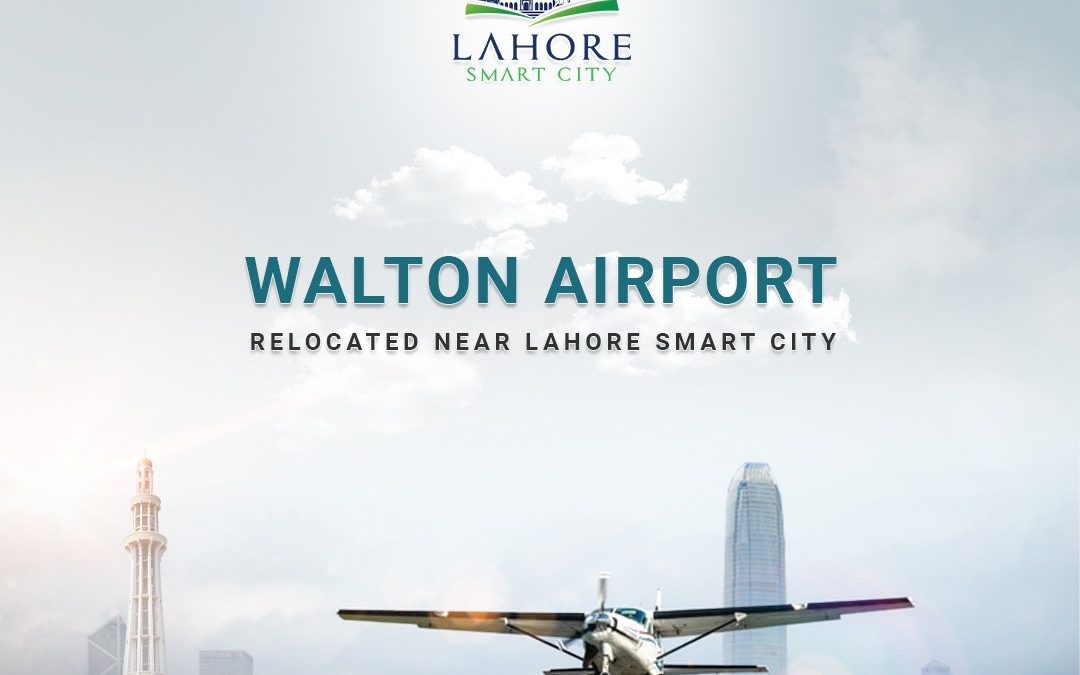 “The new Walton Airport is near by Smart City Lahore. The authorities have proposed a plan to relocate the Walton Airport at the city Lahore, near to the elegant real estate project known as the Lahore Smart City—the idea may cause the Walton Airport to be Lahore´s new Airport whereas the old Airport of Lahore may get transferred into the economic hub, bringing endless benefits to the residents of the City”

The Walton airport is a small yet effective airport that has been running its operations since 1930. This aerodrome was founded by a group of aviators and named the Punjab Flying Club, and later by 1932, the name was renewed to Northern Indian Flying Club.
By far, this is the oldest airport in Asia with 6200 feet of runway and 150 feet of width. The current update about Walton airport is that it has been decided by the authorities to relocate it near the Lahore Smart City site. The suggestion has been put forward that the area of about 600 acres on the land near Lahore Smart City has been allotted to the Walton Airport. This area is huge and bigger than the actual airport in Lahore. Hence there are major chances for the Walton Airport to become the new Lahore Airport.
The authorities from the Lahore Development Authority (LDA) have proposed the idea to convert the actual airport of Lahore into an economic hub. This will surely bring along many benefits to Lahore Capital Smart City and the City Lahore itself in general.

Lahore Smart City is already a well-known real estate project and one of the smartest cities in town. This delightful society will now be in the neighborhood of the new location of Walton Airport. The best thing to know about the area that has been given for the construction of Walton Airport is nearly 600 acres, which is good enough and acceptable. The work on the new idea has already been in progress. The facilities and list of requirements to start the work on the new Walton Airport have been provided. There are several decisions still left to be taken into account, yet the meetings are still done.

The idea of relocating the Walton Airport is an admirable plan. The new location of the Walton Airport will possibly benefit Lahore Smart City and on the contrary, Lahore Smart City can also benefit the Walton Airport. Hence it is a win-win situation. This may be beneficial in several ways, such as:
– This may cause it to become the new airport of Lahore, on a huge scale with all the new facilities and modern development.
– The City of Lahore will bring a lot of the benefits for the people residing in Lahore only. The reason is that the old Airport will get transformed into the economic hub, eventually bringing endless opportunities.
– Major value will be added to the Lahore Capital Smart City, for being near to the huge Airport.

The idea of relocating Walton Airport near Lahore Smart City

Mr. Imran Khan, Prime Minister of Pakistan, has directed the Government of Punjab on this matter. In the constructive discussion with Mr. Imran Khan, the issue of canceled NOC was put forward. The issue of the cancellation of NOCs and the prospect of relocating Walton airport was discussed.
The chairman of Lahore Development Authority presented the reasons of previously rejected NOC. He stated that the nearby building has a height of nearly 500ft, and so the Airport existing nearby can be dangerous. He mentioned a few incidents happened at the Walton Airport for the same cause. The discussions are held on the topic and the results are expected to be submitted by the end of this week to Mr. Imran Khan personally.
In the same meeting, a decision has been taken that the Lahore development authority (LDA) will take the lead role in analyzing the ongoing legislation of the land. However, the Lahore development authority (LDA) has officially proposed the plan of relocating Walton Airport in the City Lahore, and the idea has been proposed to convert the actual airport of Lahore into an economic hub. There are certain decisions still left to be made and the meetings are still happening.