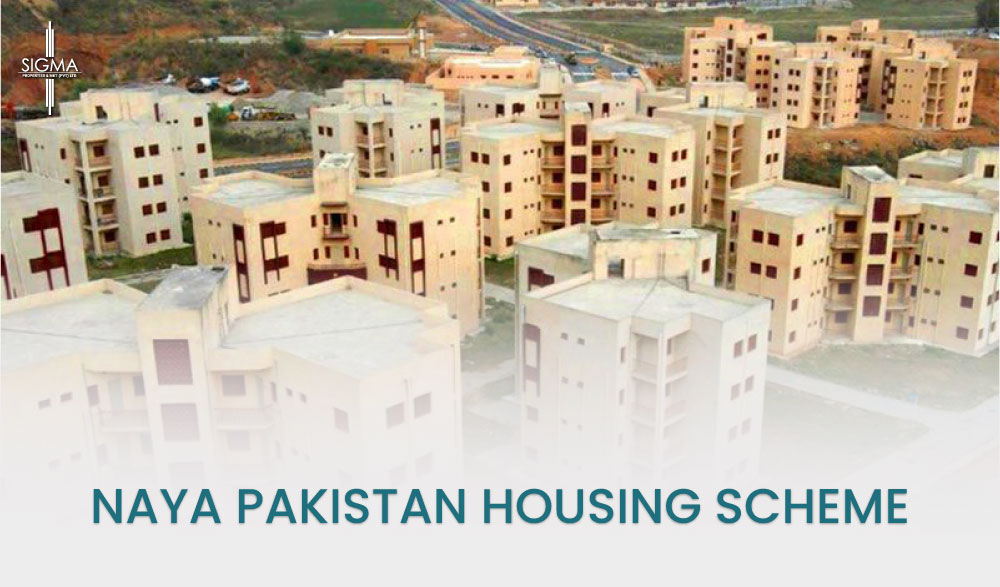 The Naya Pakistan Housing Scheme is the flagship initiative of the Pakistan Tehrik-e-Insaf-led administration, which aims to provide housing for the homeless, boost economic activity in the country, and create work opportunities for the younger citizens.

An Overview of PTI’s Agenda

None of the previous governments of Pakistan addressed the housing problems. It was mentioned in political slogans and campaigns, but it never received serious consideration and efforts. As soon as PTI came into power, it rose to tackle the unsolved problems.

PTI recognizes that the most important fundamental right of the people, as stipulated in the constitution, is to live a decent life, which any individual cannot achieve without the state’s intervention.

Pakistan’s economic situation has been vulnerable for the past few years, with a significant international trade imbalance, an unsustainable internal-external debt burden, low agricultural productivity, lower export volume, and essentially no job possibilities in a country with the world’s second-largest youth population.

Two-thirds of the population lives in rural areas, mostly in mud-housing, while the remaining 40% resides in urban regions. In major metropolitan areas such as Karachi, Lahore, Peshawar, and Faisalabad, many of the population live in slums, and other low-income individuals live in squalid housing. The urban housing shortfall in Pakistan is believed to be over 4 million, with a backlog of 7-8 million in rural areas.

PTI believes that the housing sector, which encompasses financing, construction, and related building material industries, is the only one that can address all of these concerns at once. PTI is confident that its housing strategy will alter the country’s economy and enhance the banking sector.

Currently, the country requires 10 lac housing units each year or 50 lac units in five years. As a result, PTI aims to build the necessary housing units in both urban and rural locations. It is the organization’s most valued aim.

The government has established an authority known as the Naya Pakistan Housing Authority (NPHA). It will help the government move forward with its ambition to build 135,000 housing units around the country. The project will be inaugurated in Islamabad, where 25,000 houses will be made, and then in Baluchistan, where 110,000 residences will be built. A dedicated settlement for Gwadar fishers is also planned as part of the proposal.

The Capital Development Authority (CDA) has legalized seven acres of land in Islamabad’s Mauve Area for this housing project. The board also approved the Federal Government Employees Housing Foundation (FGEHF) receiving 508 Kanal of land near Askari-VI for the Naya Pakistan Housing Scheme Islamabad.

According to reports in the leading newspapers, the Lahore Development Authority, or LDA, has approved 4,000 residential units under Phase 1 of the LDA City Naya Pakistan Apartments Project. The project will cost around PKR 10 billion.

The LDA has agreed to build 125 four-story residential complexes on 563 Kanal of land in Mouza Haloki over the next year. The project will have 32 residential units in each block. In addition, the project would include the construction of various mosques as part of the Prime Minister’s Naya Pakistan Housing Program.

The LDA authorities also resolved to build roads, walkways, sewerage systems, water supplies, water treatment plants, and other infrastructure on the 8,500 Kanal of land set aside to construct 35,000 units.

The Naya Pakistan Housing Scheme has been introduced in the Federal Capital; it is situated on the Japan Road, occupying the land of 2560 Kanal. It is also to be constructed in,

The Federal Government Employees Housing Foundation and the private sector will collaborate on the initiative. Under the Naya Pakistan Housing Project, the government shall build double-unit dwellings. As previously stated, the government would act as a facilitator for the venture, while private companies would construct the units.

A Chinese corporation has expressed interest in building two million residences as part of the initiative. The good news is that under the Naya Pakistan Housing Program, the government has made it necessary for Chinese and other multinational corporations to use exclusively locally produced raw materials. Furthermore, the government will permit no company to hire workers from other countries.

The developers will build houses in the Naya Pakistan Housing project in three categories. These are:

These houses are obtainable on a 10% to 25% down payment to all the categories mentioned above.

The revolutionary ceremony for the NPHP’s second phase will take place simultaneously with the inauguration ceremony for Phase-1. In the project’s first phase, 4000 apartments will be constructed. They will build around 35,000 units in total. A new balloting procedure for the labour class is being planned. Approximately 3,000 laborers and workers have successfully applied to be included in the upcoming ballot.

Development for the Cities in Punjab and Lahore

The Punjab government has agreed to launch this inexpensive housing project in Layyah, Quaidabad (Khushab), and Bhakkar. The process of receiving applications for the Naya Pakistan Housing Scheme will begin shortly. The government officials gave this statement to the Punjab Housing and Town Planning Agency (PHATA).

The meeting also decided to make a final decision on the preferred Lahore sites. After viewing the proposed sites, the committee will present its report. The minister also ordered that a meeting of the PHATA governing body be held every 15 days to expedite the continuing work of the Naya Pakistan Housing Scheme. A design brief for the Naya Pakistan Housing Scheme Multan was also released.

Who can apply for Naya Pakistan Housing Scheme?

Variants of the Product

Eligible Age for Applicant and Co-Applicant

PM Imran Khan reported to have instructed the Federal Board of Revenue to exempt construction activities under the Naya Pakistan Housing Scheme from sales tax and fixed taxes. Firdous Ashiq Awan, the Special Assistant to Imran Khan on Information, communicated the decision to the media on December 5.

The legislation, which is being considered in Punjab, KPK, and Baluchistan, aims to promote the country’s housing and building sector. PM Imran Khan also requested that provincial officials notify him of any idle public land to utilize for his low-cost housing initiative.

Banks shall offer home loan facilities with reasonable terms and circumstances that allow for payment to be made over up to 20 years. Renowned banks like Bank Al Habib Limited and Meezan Bank Limited offer loans for five years at the minimum and can go up to 20 years.

So, if you have applied for this economic housing project, be prepared to pay a 20% down payment as a part of the Naya Pakistan Housing Scheme, with the bank covering the remaining 80% through the home financing option.

The payment plan for residential plots offered under the third phase of the NPHP in Rawalpindi has been issued by the Punjab Housing and Town Planning Agency (PHATA). These plots range in size from 3 to 5 Marla.

Please note that the deadline for submitting NPHP application forms in Rawalpindi is December 12 December. The condition is available on the official PHATA website and submitted at any of the Bank of Punjab’s approved branches before the deadline. Furthermore, the predicted total price for these residential plots may vary. Additionally, it excludes Sui gas utility charges.

Society requires the applicants to achieve specific income requirements for the entire household. Application form is available on the official site of the National Database and Registration Authority (NADRA).

The applicants are bound to state their family’s total gross income per month if it is in the range mentioned below,

On July 15 July 2019, the second phase of online registration for the Naya Pakistan Housing Scheme began across Pakistan. It is open to deserving families for the next three months until October 15 October. The Gov later extended the deadline to November 15. Because of the program’s growing popularity, the deadline for registering for this low-cost housing scheme has been extended to the middle of December.

It is an ideal opportunity for those living in rented housing due to a lack of financial means. For booking and further details, visit the Sigma Properties office or consult with our experts online.

The government would be required to offer a subsidy under the pilot project, currently being run by the Town Planning Agency (PHATA) and Punjab Housing in six areas across Punjab.

Fixed-rate mortgages seem to be the only product that appears to be the most economical. Applicants will not have to be concerned about interest rates rising if it is fixed. However, we expect that most of the pilot residences would have monthly mortgage payments exceeding Rs20, 000, which is the upper limit of our highest instalment category. A government subsidy will fill this. 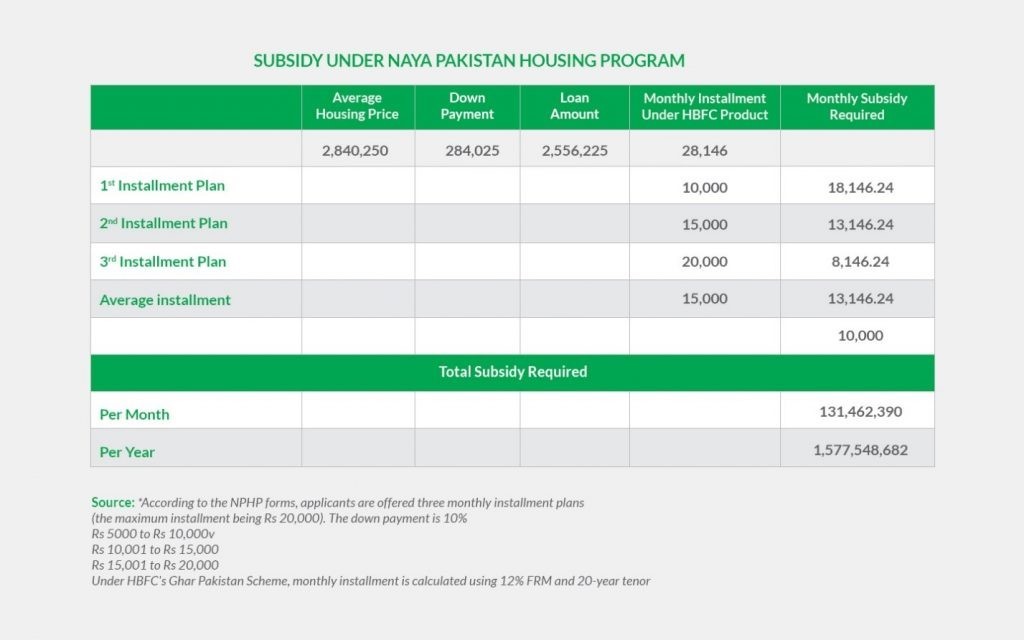 Unfortunately, a lot of guesswork is involved here. We will have to rely on estimates since we don’t know the actual distribution of houses to be built regarding size and housing price and how many allotters have chosen which monthly payments plan; we’ll have to work with averages.

According to our calculations, the government will have to pay Rs1.5 billion each year for the next 20 years, based on the average housing price and the average monthly instalment under the NPHP (PKR 15,000, assuming the PHATA builds 10,000 in the pilot project). Realistically speaking, when more houses are created each year, this subsidy balloons to a massive amount. 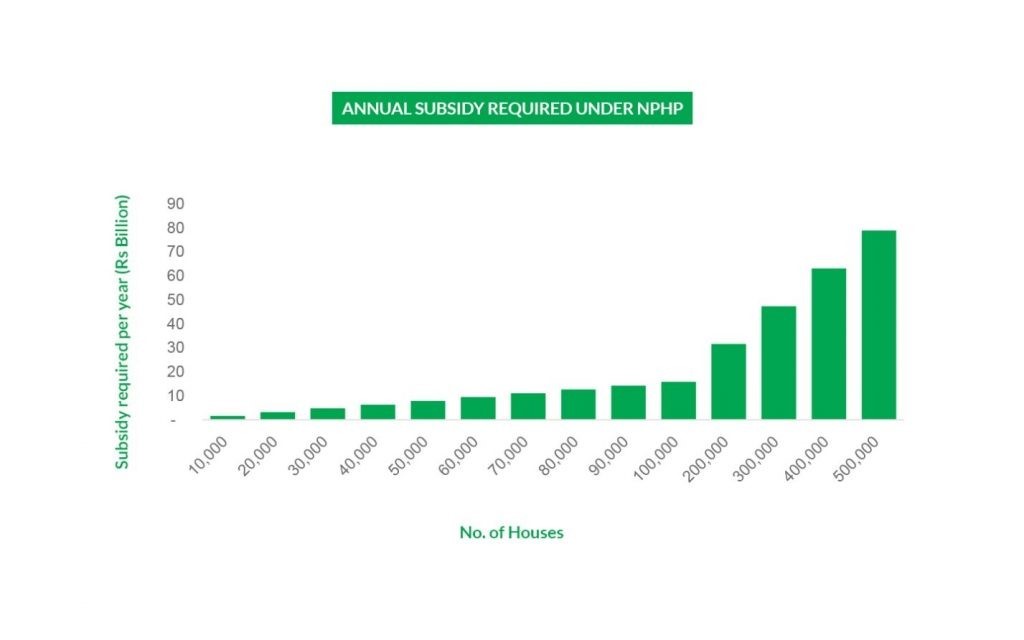 In the immediate future, the Naya Pakistan Housing Scheme Phase 3 will be launched. After its effectuation, almost 60% of the housing problems in the country will be resolved. The industrial and employment sector will have a massive impact on the scheme’s success. When a more significant part of the nation is living in pure and proper abodes, the country shall prosper unlike ever before. Would the succeeding governments honor the commitments that this government may make under their budgets during its tenure? Only time will tell.

Homelessness is a huge issue that affects not only this region of the world but even developed countries. It is not the only problem in Pakistan, but it is the core problem, engulfing all of the rest within its realms. Imran Khan’s strategy to take on the shortage of homes will give wings to all the other sectors. It is similar to the methodology adopted by Finland, they provided inexpensive housing options to the lower class, and it was a huge success. Even if a person is battling drug and alcohol addiction, the country considers that having a home is a fundamental right of every citizen. As a result, once the homeless were given a place to reside, they did not see any reason to continue doing drugs.