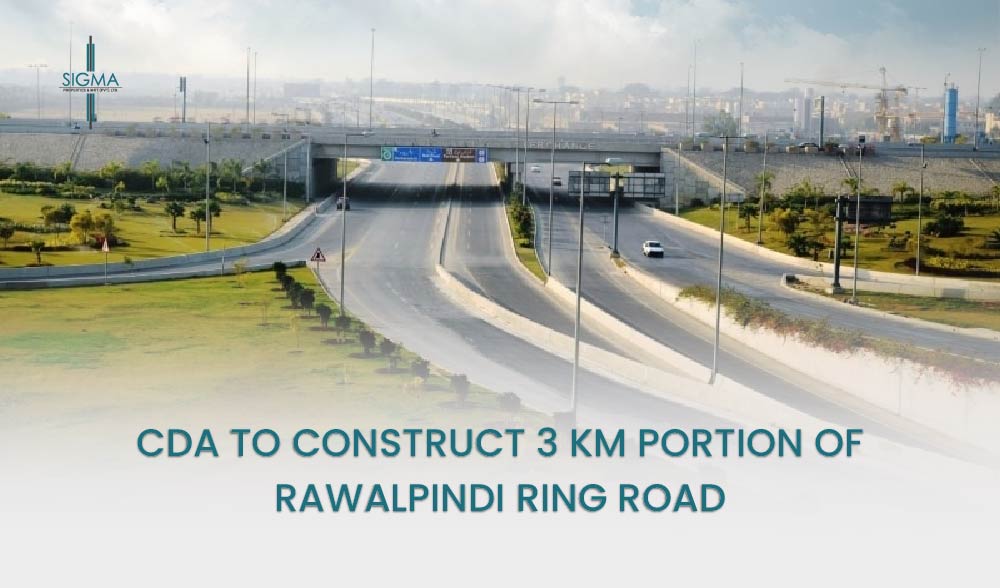 The Punjab government & the Capital Development Authority (CDA) reached an understanding on Tuesday about the construction of a three-kilometer stretch of Rawalpindi Ring Road, which falls under both cities’ jurisdiction. There was a meeting between the government of Punjab and the CDA, which was led by Sardar Usman Buzdar, the chief minister of Punjab.

Members of the CDA’s estate & engineering committees were in attendance. According to the reports, the CDA will be responsible for the construction of the segment of the highway that includes an interchange.

Nevertheless, Punjab’s government will foot the bill for any repairs done in the province’s authority. The building on Margalla Road is currently ongoing and is expected to be finished by the end of Summer 2022.

A part of Pakistan’s ring road will connect the Peshawar-Islamabad Motorway with the GT Road around Sangjani, at which an intersection will also be built. Wapda Town’s N-5 is the most likely location for a new interchange. It’s already being built from Sanjgani to D-12, where Khyaban-i-Iqbal will be connected to Margalla Road.

According to the sources, construction on Margalla Road is expected to be finalized by the end of Summer 2022. Good decisions were reached at the session to allow the same municipal agency to complete the building of this little distance, approximately 3.4 kilometers in length. Following the MI-GT and Margalla roads, citizens will have access to an improved transportation network.

Rawalpindi’s authorities made many attempts in the past year, but the CDA turned them down because it refused to allow a provincial agency to build a road within its jurisdiction.

Prime Minister Imran Khan backed the CDA’s position in February this year and announced that CDA would build the road segment within its jurisdiction. While Punjab and CDA would acquire property in their respective zones, the development will be handled by the CDA, according to sources present. According to authorities from the Pakistan Development Authority (PDA), more than two-thirds of the road is situated in Pakistan’s Punjab province, according to authorities from the Pakistan Development Authority (PDA). As part of the Margalla Road construction, the CDA hoped the Frontier Work Organisation (FWO), which is already working on the road, might gain market share for the road segment that needs to be completed quickly.

Capital Development Authority (CDA) has agreed to construct a three-kilometer section of the Rawalpindi Ring Road (RRR) that falls under the administration of both cities, as per news reports. Chief Minister Sardar Usman Buzdar presided over a meeting between the Punjab government and the CDA. The CDA will build an interchange and a section of the RRR as per the specifics. Punjab state pays for projects done within its authority; it was agreed during this meeting. The CDA would oversee construction while the government would be responsible for land acquisition.

Islamabad’s top civic authority, the Capital Development Authority (CDA), is in charge of city planning, construction, and upkeep. Additionally, following the CDA Ordinance 1960, it is responsible for coordinating with other government agencies, such as the Metropolitan Corporation Islamabad (MCI) and the management of Islamabad Capital Territory. Ordinance 1960’s second goal was to allow CDA to perform various duties, including municipal, safety and cleanliness; education; and the delivery of commodities.

Updation of the Ring Road

Rawalpindi Ring Road Project’s completion will be a great opportunity for Rawalpindi-Islamabad property investors. This road was built to handle the large amount of traffic generated by the residents of the twin cities. This project’s 50 billion PKR cost will have a favorable effect on the housing market. In the opinion of the industry’s specialists, this initiative may increase economic potential in real estate. Channi Sher Alam Bridge in Rawat would be the starting point, and the destination would be Thalian Interchange, on a 64-kilometre extension of the current route. This 300-foot-wide highway features a commercial district on either side and ten overpasses, three interchanges, including six flyovers. It’s also home to several businesses.

Influence of ring road on societeis

Overall, this route would improve the value of the housing projects, particularly those located near the Motorway and the Islamabad Airport. The citizens of the metroplex would have immediate access to the Airport and the M2 Motorway because of this development.

The RRR is scheduled to be finished in two years, with a total length of 38.25 kilometers. To do so, the responsible authorities will spend around PKR 4 billion on purchasing 11,000 Kanals of land. It has been determined that money for the land purchase will be made available during the 2018-19 fiscal year by the Punjab Planning & Development Department (P&D). Link roads for the RRR, which is 300 feet wide, will be three. Rawat Link, the first link of the RRR, will be 12.5 km long; Girja Road, the second link, will be 1.5 kilometers long; and Fateh Jang, the third link, will be 6.5 kilometers long. Right-of-way between Girja Road & Thalian Interchange would be between 60 and 90 ft in width. However, it isn’t certain how many interchanges the ring road will feature, as various sources give a conflicting number. The cloverleaf interchanges for GT Road and Rawat and Adyala Road, Chakri Rd, and Girja Rd are already known. As a result, the RRR is expected to make use of the Thalian interchange.

Ten kilometers from Rawat, RRR will begin at Mouza Banth and terminate at Thalian Interchange on the Lahore-Islamabad Motorway M-2. Banth to Rawat Chak Beli Road, Mouza Mera Mohra to Bassali, and then back to Banth Mouza Lilla, Kamalpur, Trahia, Dhapia, Khasal Khurd, and Adyala Road bisect it from there. On the northwest side of Adyala Road, the route will head to Chakri Road and continue north to meet the Thalian interchange just on M-2 Motorway at the Thalian intersection.