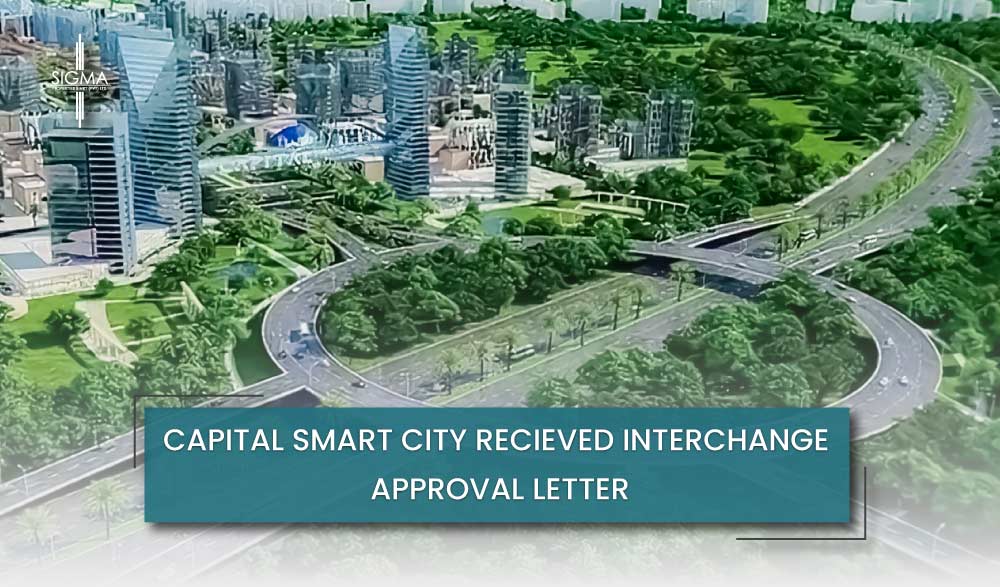 To own a piece of land, first of all, you search for its access points. Similarly, many people were anxious about the interchange concerned with Capital Smart city. People thought if the Smart City fails to get approval for interchange, then the city’s development will face more challenges. People were always asking what the housing city benefits were as it was close to the Airport but not connected to the motorway through interchange. And they were accurate in their doubts to link the city’s success with the approval of interchange. The owners of the smart capital city are trying emphatic efforts to facilitate its clients.

The capital smart city now has made shorten its way to the highest level of development. Recently, NHA gave approval to the said society  for interchange. With the permission of the interchange, the smart city has access directly to the Airport. The NHA approval letter has many points. The directors made the letter public so that everyone could know the facts behind the giant leap. However, there was no such need for the showing of this letter to the public, but it will boost the confidence of the investors who intend to invest in capital smart city. The clauses in the letter are given below:

Clauses in the interchange approval letter

NHA issued the letter on June 6, 2021. Capital Smart City submitted Rs 47 crore for two years to complete the interchange. Within the duration of two years, the interchange has to be completed and operated. In case if they fail to complete the task, NHA will return its submission fee after some necessary deduction. And then they have to follow the whole procedure for approval again.

Capital smart city cannot use the letter for publicity

The next point of the letter is that CSC cannot use the letter for publicity, but they made it public because the owners of the CSC don’t want to keep their investors in doubt. The clients kept asking about the NOC and letter to show them even in black & white copy. So, despite the prohibition of the authorities, smart city made it public to answer the questions of its clients. Due to this clause, the smart city did not agree to publish the letter.

New owners of the CSC will revise the whole procedure

According to the third clause, if the owners of the smart city transfer the ownership of the smart city to another owner, then NHA will cancel the approval letter for interchange, and the new owners will file a request again for the interchange approval letter. This is just a clause embedded by the authorities. Otherwise, there is no chance of changing the ownership as CSC is not a little shop. Now it has become a real industry state. It is a large group of investors and developers. It has a  lot of projects and huge capital. So, there is no need to worry about transferring ownership.

The fourth clause is to add more land to the project. First, it was the project of 7500 Kanal, and now it is going to approve 25000 Kanal. The addition of land to the CSC, though, very impressive, but then the city has to pay Rs60000 per Kanal to the NHA. Surely, there is no fault in increasing the Kanal of the land, but just the city has to pay a little more amount to the authorities. The land addition has no bad impact on the people as they should happy to have such projects.

According to the 6th clause, the design and operation will be according to NHA. The capital smart city should keep straight all the instructions and designs of the NHA. The authorities will approve the project after the completion if it does not collide with their proposed design.

Benefits of the interchange approval letter

The overseas clients will get more benefits due to the approval of this letter as interchange leads beside the overseas block. Paperwork and design work will take somewhat three months. In December, the developers will start physical work on the project. As we discussed above, the land addition will improve the investment rate, and society will get more fame. The investors who have already invested can have more profit as the interchange approval letter drew more attention from the people.

You clearly know that even a single paved road linked to land increases the market value of that land. Now imagine how an interchange would increase the value of lands along which it passes. This housing society  now has a prominent posture among others as it achieved the milestone. I

f you want to avail the opportunity, don’t wait for tomorrow and visit sigma properties for booking your plot in Capital smart city.