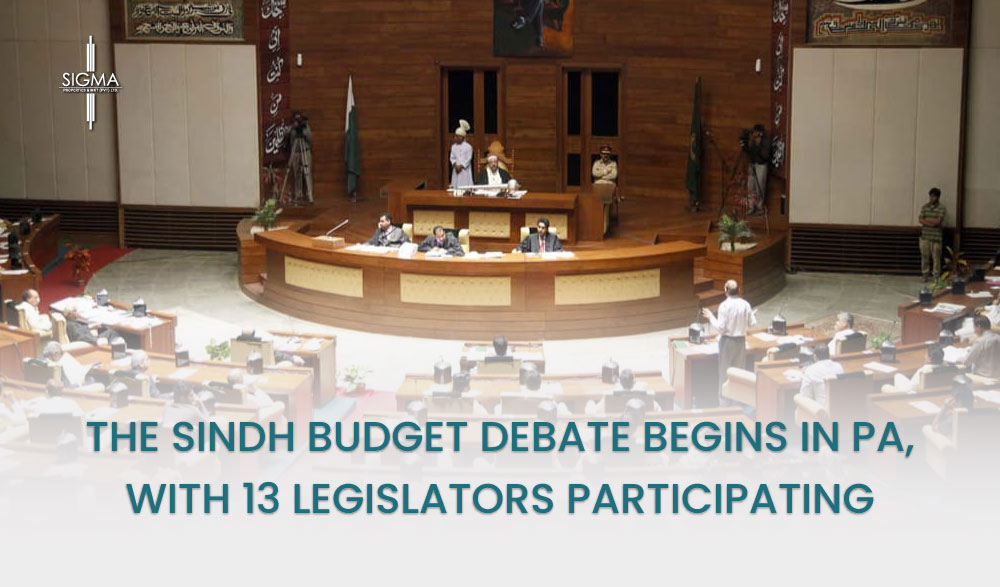 The Sindh Budget Debate Begins in PA, with 13 Legislators Participating

On Friday, 13 Members of parliament from both sides of the aisle participated in a general discussion on the provincial budget for 2021-22 in the Sindh Assembly.

Even though the meeting was otherwise quiet and orderly for the first time in a long time, members from both sides criticized each other’s leadership.

Speaker Agha Siraj Durrani expressed his displeasure at the start of the proceedings over what he described as some opposition members’ juvenile behavior when they presented the budget in the chamber.

Dr. Sohrab Sarki of the ruling Pakistan People’s Party kicked off the post-budget discussion by stating that the provincial government committed a significant portion of the budget to the development sector and increased government employee salaries by 20%.

He claimed that they frequently chastised the PPP-led Sindh government for not carrying out projects, although they completed “huge” projects during their tenure.

Shaharyar Khan Mahar of the Grand Democratic Alliance condemned the provincial government, claiming that if they spent only 10% of the whole budget on the betterment of the province’s people, it would change the province’s fate. “The budget arrangement is adequate for the province’s development,” he stated.

He said that they constituted a town committee with 18 clerks, although only two clerks were required to be needed.

The GDA member expressed alarm about the deteriorating law and order situation in Shikarpur. He believed that there was only a rudimentary police presence in the area.

He claimed that the provincial government was rife with corruption and that the chief minister was identified four times in a report by a joint questioning team.

Mr. Mahar claimed that the Sindh government had purchased expensive automobiles to combat the locust problem.

The leader of the GDA has accused the government of failing to include opposition members in its budget. Abdul Razzaq Rahimoon said there was no such scheme in the budget this year. He claimed that they should have included the opposition’s plans in the budget.

Pakistan Tehreek-i-Insaf member Saeed Afridi explained that the provincial budget was anti-people. He said the provincial government was incompetent and inefficient as it could not fully utilize the development budget in the last fiscal year. Surendar Valasai added that it would help development in the province.

PPP MPA criticized the federal budget and said that a price hike was imminent. He demanded that Thar Institute of Engineering, Science & Technology (TIEST) be converted into a university in Sindh. The provincial government has allocated Rs1.64bn for this “historic project.”

Dr. Imran Ali Shah of the Pakistan Tehreek-e-Insaf (PTI) applauded the increase in the health budget and urged that a significant portion of it be directed to preventative measures rather than therapy.

Dr. Shah stated that a 25-bed hospital in Lyari has been in the works for the past ten years and that MRI and CT scans at the Dr. Ruth Pfau Civil Hospital Karachi were not working.