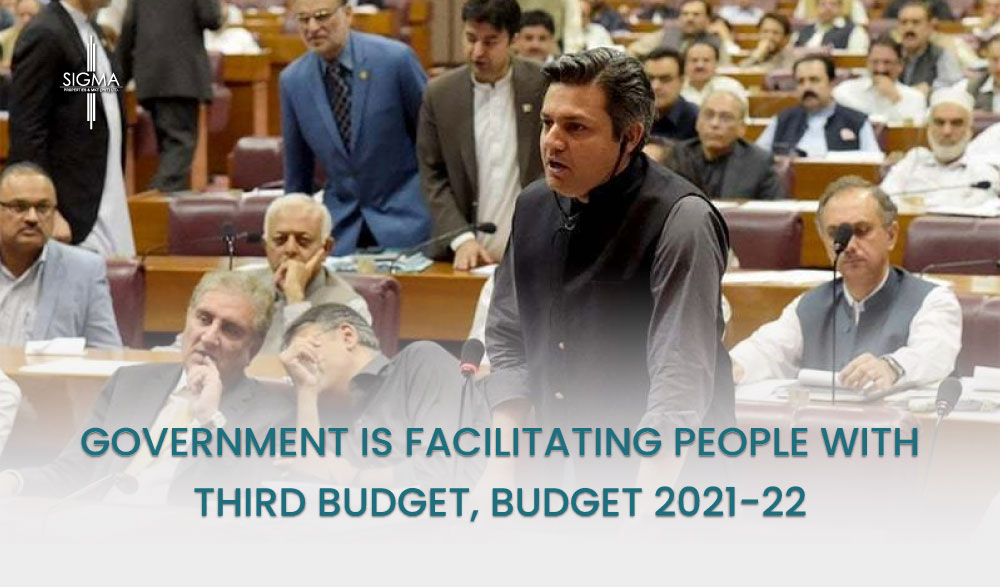 With certain constraints imposed by the ongoing Covid-19 pandemic and the IMF programme, the government is facilitating people with a third budget, budget 2021-22. It introduced its third budget on Friday, emphasizing an expansionary and feel-good approach by massively increasing subsidies and incentives for big business, manufacturing, corporate market, and agriculture sectors and proposing a nearly 24% increase in revenues, including a tax reduction.

The stabilization period is now finished, and the budget for 2021-22 will be focused on inclusive and long-term economics.

Finance Minister Shaukat Tarin remarked in his budget speech, which was disrupted by loud sloganeering by opposition parties, that “investment fosters growth.”

The additional revenues of Rs506 billion are based on policy actions costing Rs264 billion and administrative costs of Rs242 billion. The budget more than doubles subsidy allocations (226%) and greatly raises oil and gas taxes and duties, including a 36 percent rise in the petroleum levy. At the cost of Rs160 billion, it also allows for a 10% rise in salaries (ad hoc allowance) and pensions, as well as universal health care through the Sehat Card.

As a result, the revenue strategy depends heavily on indirect taxation, which is primarily outside of the divisible pool sources that keep the federation alive financially. For example, the gas infrastructure development allowance, which would grow by 767 percent to Rs130 billion next year from Rs15 billion this year, would generate Rs115 billion in additional revenue.

Read More: Punjab To Get The Largest Share From The Federal Divisible Pool

Petroleum duty on oil projects is expected to generate a similar and even larger additional revenue of Rs160 billion, implying that petroleum prices will rise in the coming fiscal year. The petroleum levy target for next budget year 2021-22 is Rs610 billion, up 35 percent from the current year’s Rs450 billion, which will now reach Rs500 billion by June 30, 2021.

The natural gas development surcharge is likely to rise by 260 percent to Rs36 billion next year, up from Rs10 billion this year. Furthermore, taxes on crude oil would increase by 52 percent to Rs35 billion, and taxes on natural gas would rise by 20 percent.

The budget 2021-22 includes significant concessions to the manufacturing sector, including automobiles, textiles, pharmaceuticals, mobile phones and information technology, and even small and medium enterprises (SMEs), through lower import duties on raw materials and lower general sales.

The stock market has also benefited from a reduction in capital gain tax from 15% to 12.5 percent, as well as the removal of a number of withholding taxes, including those on banking transactions, stock exchange transactions, margin financing, air-travel services, debit and credit card-based international transactions, and mineral exploration.

Subsidies for next year are expected to be Rs682 billion, or 226 percent more than the current year’s Rs209 billion, which was later revised to Rs430 billion. However, payments to independent power producers and tariff differential subsidies account for the majority of this. The power sector is expected to grow by 327 percent next year, to Rs596 billion from Rs139.5 billion this year. K-share Electric’s of subsidies is expected to climb to Rs245 billion from Rs129 billion this year, indicating a major rise of over Rs120 billion or 90 percent.

The provincial share of federal taxes would rise from Rs2.7 trillion this year to Rs3.4 trillion next year, an increase of about Rs707 billion, or 25%, but the federal government would keep about Rs570 billion as a provincial cash surplus to keep the federal deficit from surpassing 7.1 percent of GDP.

Expenses of the federal government

The federal government’s current expenses will be approximately Rs7.5 trillion next year in budget 2021-22, up 14 percent from the current year’s Rs6.56 trillion. Interest payments are expected to be Rs3.06 trillion, up from Rs2.85 trillion this year. The total pension bill, excluding the recent 10% increase, is anticipated to be Rs480 billion, with Rs260 billion going to military pensioners. The cost of running the entire city government would be Rs479 billion, down from Rs487 billion this year, while military expenses would rise to Rs1.37 trillion, up from Rs1.29 trillion last year, a 5.8% increase. The Public Sector Development Programme (PSDP) is expected to cost Rs900 billion next year, up from Rs650 billion this year, which has been further reduced.

The restoration of the self-assessment program, which was previously used by the Pervez Musharraf, is the highlight of the taxation side, although this is opposed by a third-party audit and a Federal Board of Revenue restriction on tax notices.

According to the finance minister, the budget does not include any new taxes for the salaried class. The expense of tax compliance would be decreased, as would the need for annual profile updates despite the submission of all data as part of tax returns. Federal excise and sales taxes for locally built cars with engines under 850cc and electric vehicles were also lowered in the budget.

For another six months, the finance minister proposed relief measures on the establishment of cold storage facilities for agricultural products, as well as lower taxes on Covid-related medical equipment and other items. He also promised a 20 percent raise in the minimum pay for private workers, to Rs20,000 per month.

The finance minister declared that the government had included an economic plan in the budget 2021-22 that addressed the prosperity of all segments of society, from agricultural to industry, from services to social services, from labor to farmer to women, students, homeless, government employees, young, and poor households.