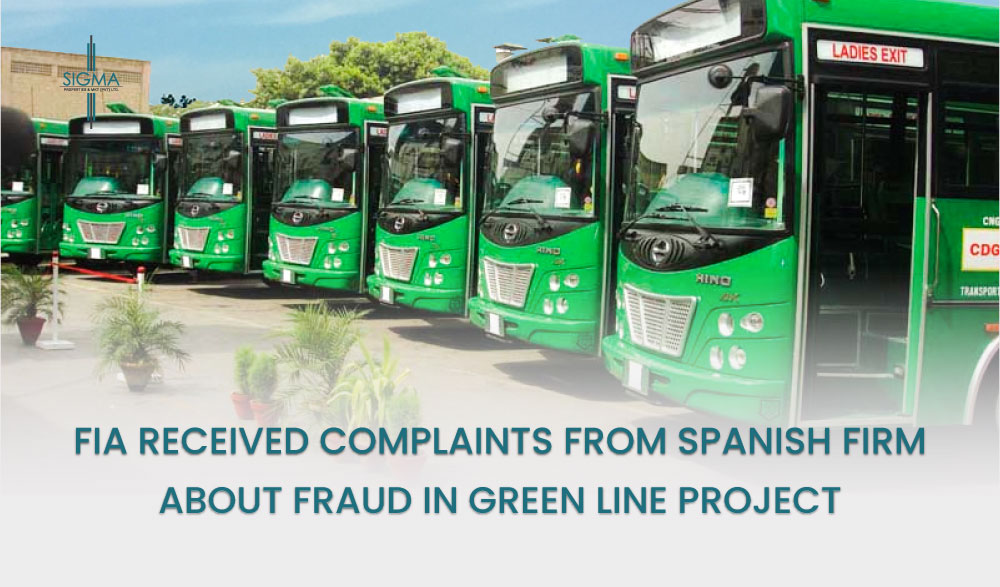 According to our sources the much awaited green line project faces corruption and fraud. The European firm had taken the responsibility of technological support of the project. However the project gave birth to many controversies. Eventually, the FIA received complaints from Spanish firm about the green line project.

Our sources added that one of Pakistani contactors is involved in the corruption scam.

The complaint came from GRUPSA, a Spanish firm that is regarded as one of the world’s pioneers in automation technology, claiming that it provided platform screen doors (PSDs) for the Green Line project for over half a million euros.

. The European firm supplied the project through a Pakistani contractor more than two years ago, but it later learned that its reputation was endangered since the government of Pakistan was being paid more than two and a half million euros for services provided in the name of the Spanish firm.

About the Spanish firm

M/S MGH has prepared a false invoice for M/S GRUPSA, claiming payment of Euro 2,732,232.76 as the total amount of the manufacturer invoice from the Karachi Infrastructure Development Company Limited on account of the import of Automatic Platform Screen Doors from the United Arab Emirates.

According to a statement in the letter, the Spanish firm complained to the cyber wing of FIA about the scam in the green line project. the firm also had submitted complain to NAB and embassy of Pakistan in Madrid.

According to the invoice report, The import price received by M/S GRUPSA is 511,957 euros against an issued invoice No. AAAQ17544-11 dated 15-05-2018, but M/S MGH claimed Euros 2,732,232.76 with a fake identity dated June 12, 2018 by using digital data and identity information of GRUPSA without authorization with the intent to commit fraud by changing as invoice ref. no. AAAQ 3743/2018 and an amount of cla As a result, M/S MGH has harmed GRUPSA’s name and goodwill, as well as caused a significant damage to the national economy.

The company’s senior managers met with Pakistani officials at the Madrid embassy and also wrote a letter to the trade and investment counsellor, calling for action against the unfair operation, which had not only harmed the company’s reputation but also cost the Pakistan government money.

In a letter to the FIA’s cyber wing, the Spanish firm urged that they should  investigate the fraud in green line project right once and that the offenders be punished in accordance with the law for electronic forgery, unauthorised use of identity, electronic fraud, corruption, and embezzlement. It stated that the public funds be retrieved as soon as feasible.