China and Pakistan to sign an IC Agreement at JCC 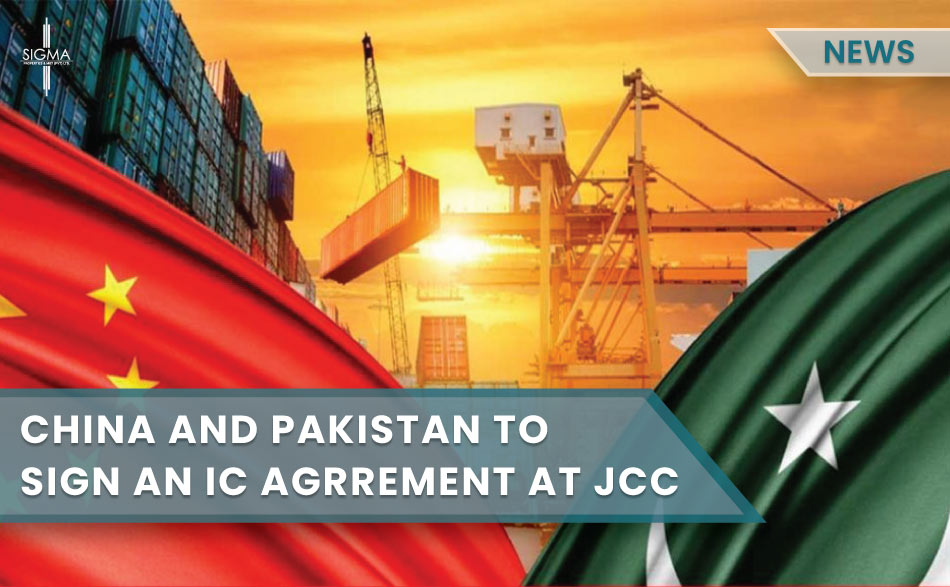 China and Pakistan to sign an IC Agreement at JCC

During the 10th Joint Cooperation Committee (JCC) meeting on the China-Pakistan Economic Corridor (CPEC), to be held via video-link this month, China and Pakistan are expected to sign a framework agreement for Industrial Cooperation (IC). According to the China Economic Net (CEN), both countries have already signed an Industrial Cooperation Memorandum of understanding (MOU). There is an expectation that they will take it to the next level at the upcoming JCC summit.

The JCC, co-chaired by Pakistan’s minister for planning and China’s head of the National Development and Reforms Commission (NDRC), is the CPEC’s highest decision-making body. China and Pakistan have established a ministerial-level Joint Commission on CPEC Long-Term Planning to help implement CPEC. The JCC had seven joint working groups (JWGs) for planning, energy, transportation infrastructure, the Gwadar Port, industrial cooperation, social-economic development, and international collaboration. Eventually, a JWG on agriculture and the other on science and technology came into formation.

Under CPEC, the JCC is in charge of general planning and coordination, while the JWGs are in charge of detailed project planning and implementation.The National Development and Reform Commission (NDRC) of China and the Ministry of Planning, Development, and Reforms of Pakistan have JCC secretariats. The two secretariats are in charge of engaging with and coordinating with line ministries on CPEC projects. The JCC has hosted nine meetings to date, and it has been held annually since 2015.

They completed all of the necessary preparations for the Rashakai Economic Zone’s groundbreaking. They have received 700 applications for establishing industries in the economic zone thus far. The Mainline-I (ML-I) project, one of the significant CPEC projects, is also expected to be discussed at the 10th JCC meeting. In the agriculture sector, CPEC has identified 18 projects costing roughly Rs83 billion to utilize its potential and upgrade it for long-term economic growth.

They will present these initiatives during the 10th JCC meeting. The China-Pakistan Joint Working Group identified about a dozen short, medium, and long-term initiatives relating to the Ministry of National Food Security and Research (MNFS&R) livestock wing and the Livestock and Dairy Development Department.

You may also like Russian Delegation to visit Pakistan and make Talks on PSGP.

The Pakistan Agricultural Research Council will carry out six research and development projects. In contrast, they have identified a project for building an aquaculture park in Pakistan’s coastal districts. Meanwhile, on Monday, China’s Ambassador to Pakistan, Nong Rong, met with Pakistan’s Minister of Planning, Asad Umar, to discuss the upcoming 10th JCC meetings and economic cooperation between the two nations. The meeting also included the secretary of planning and the head of the CPEC Authority.

The minister expressed satisfaction with the JWG’s work and stated that they would boost the pace of CPEC project implementation in the following weeks. “Currently, one of the key goals is the establishment and operationalization of Special Economic Zones (SEZs).” The SEZs would allow for the formation of manufacturing joint ventures that would combine both sides’ businesses,” he noted.

The JCC, according to the ambassador, will provide an opportunity to promote bilateral collaboration under the CPEC umbrella. He added that the upcoming summit would bring up a slew of new opportunities for cooperation.